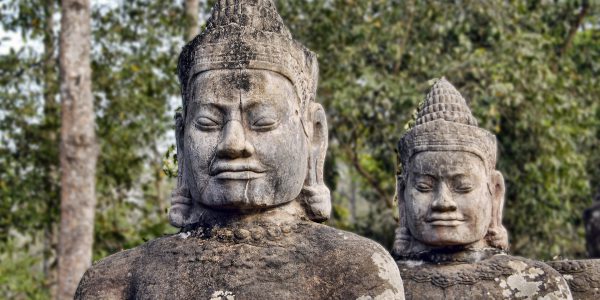 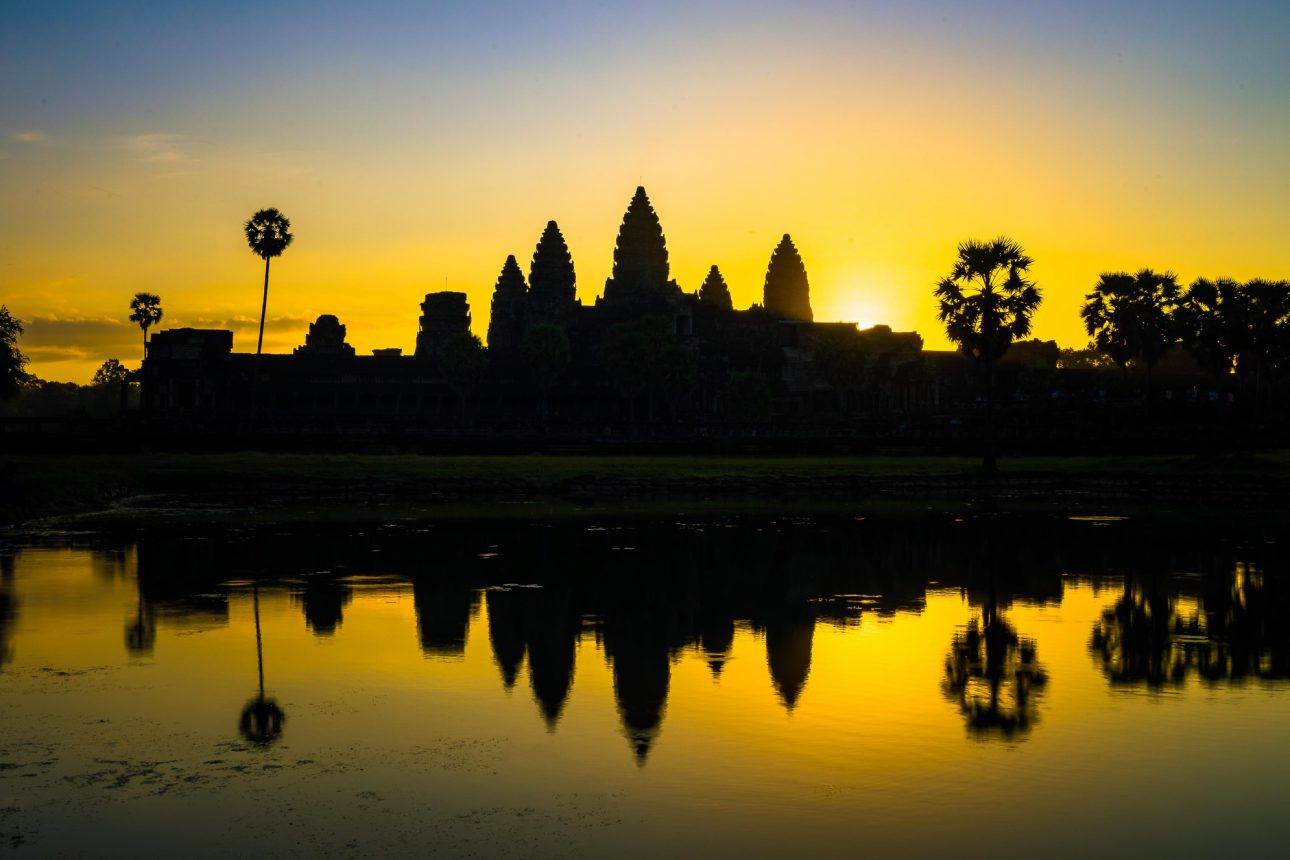 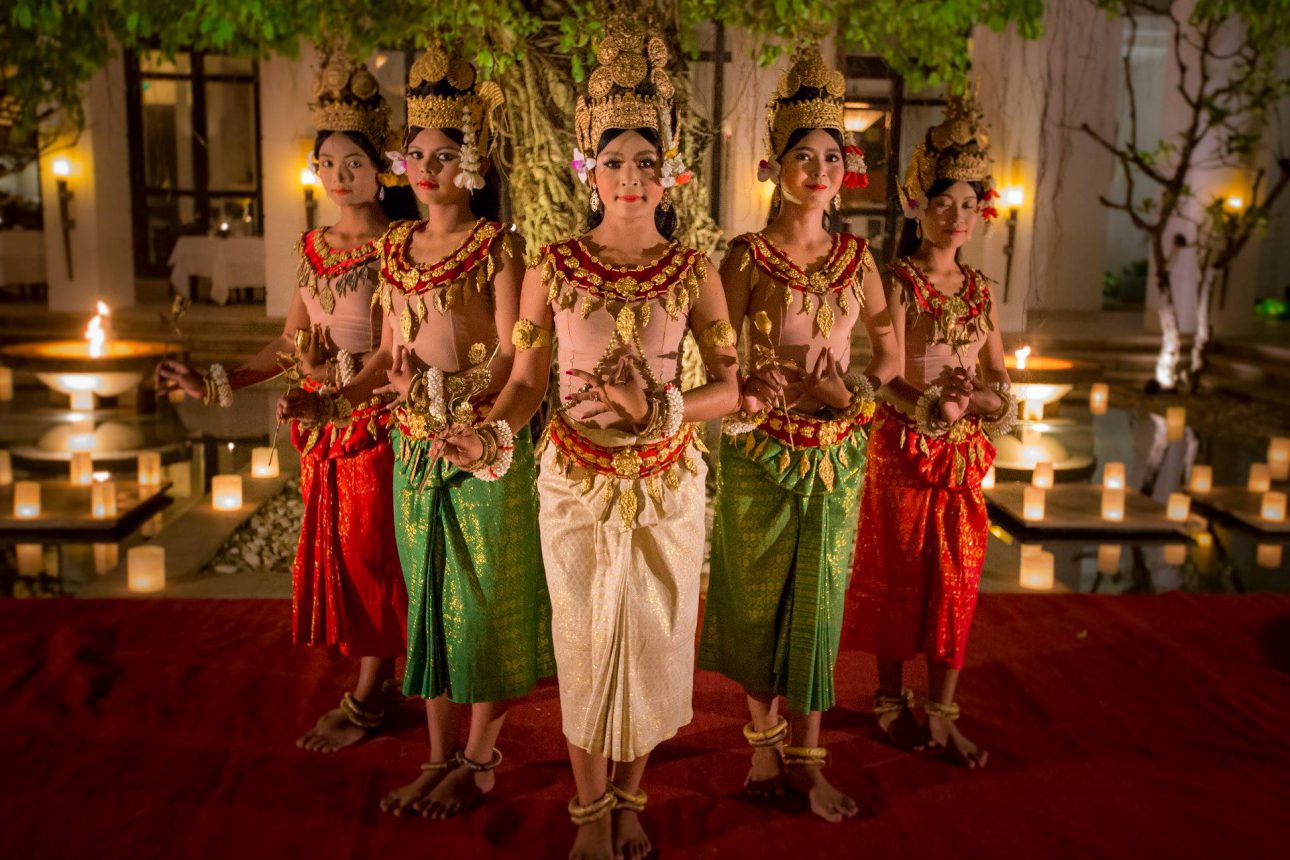 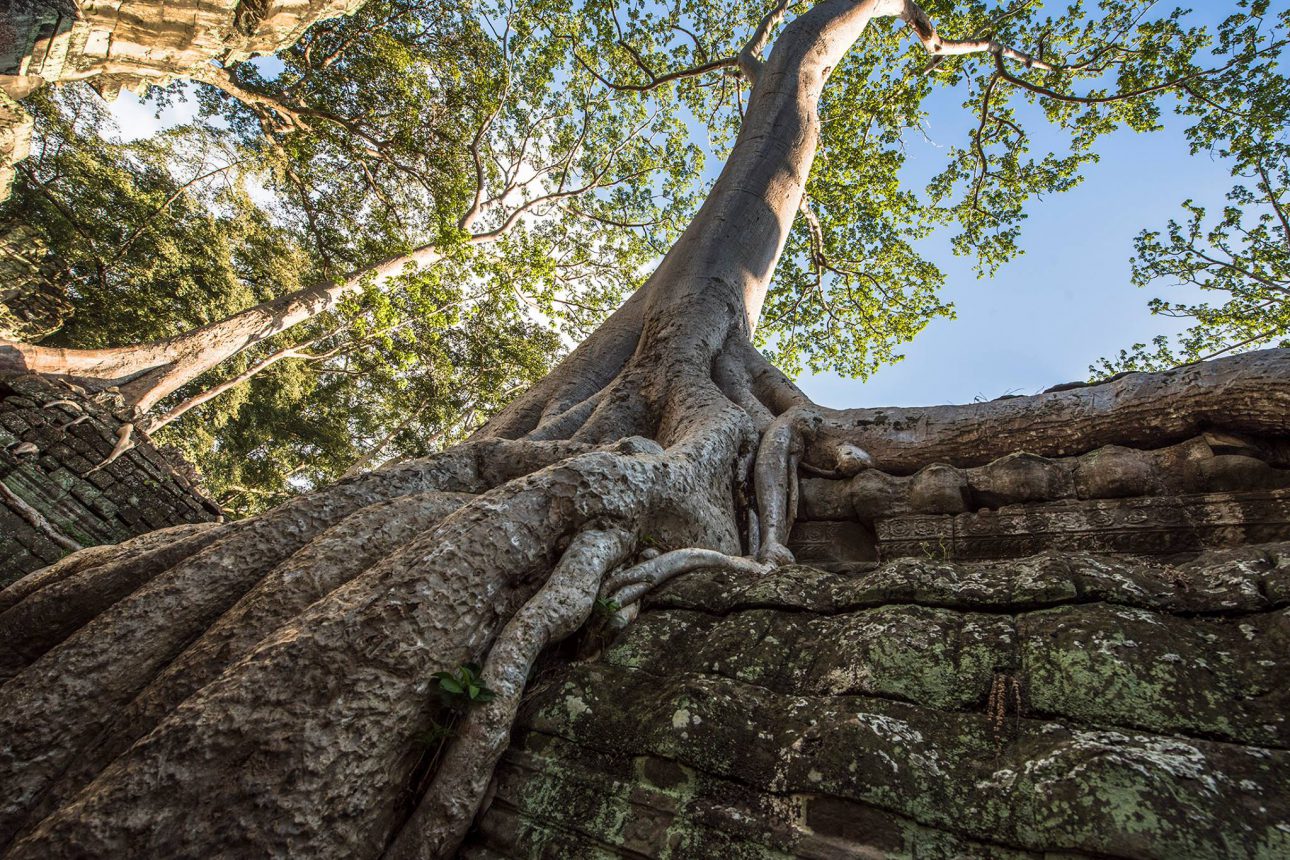 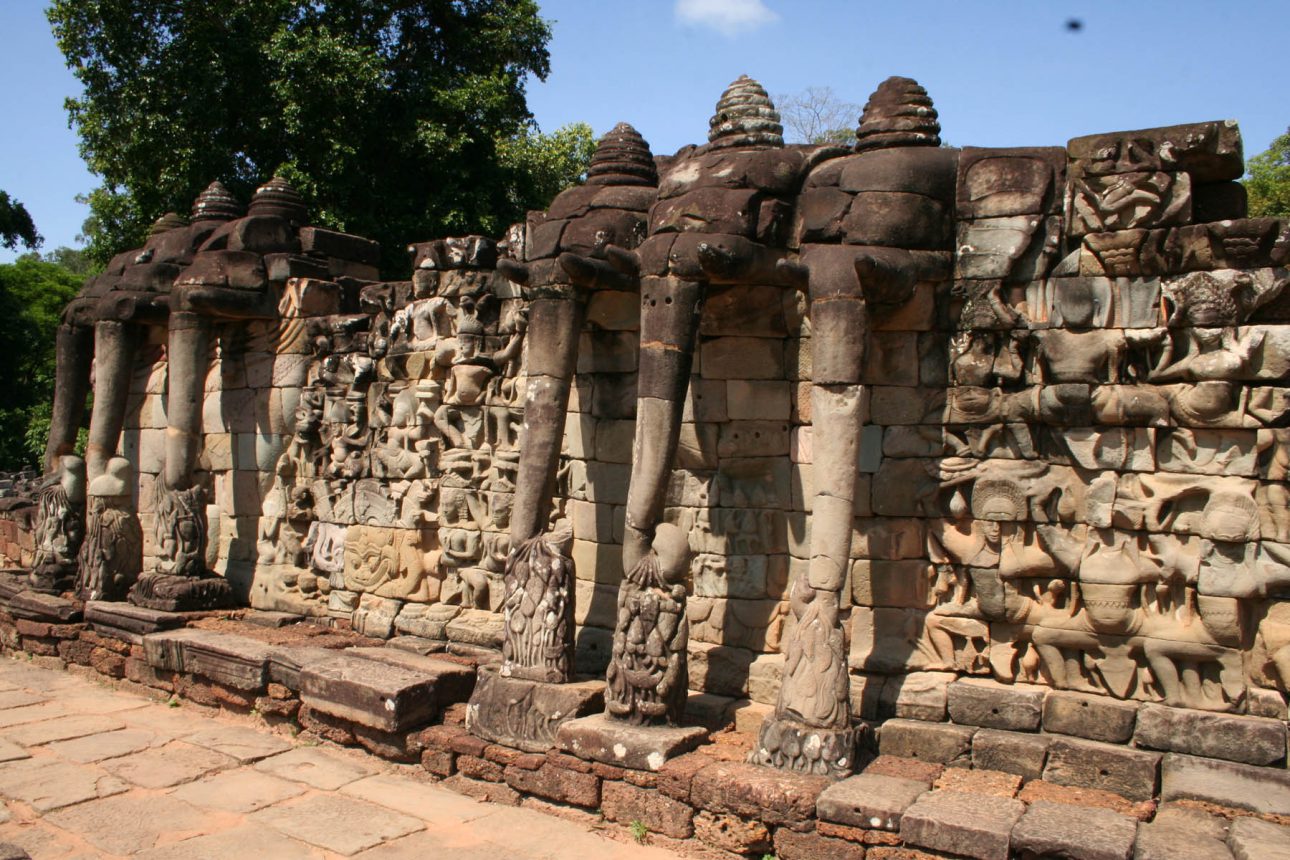 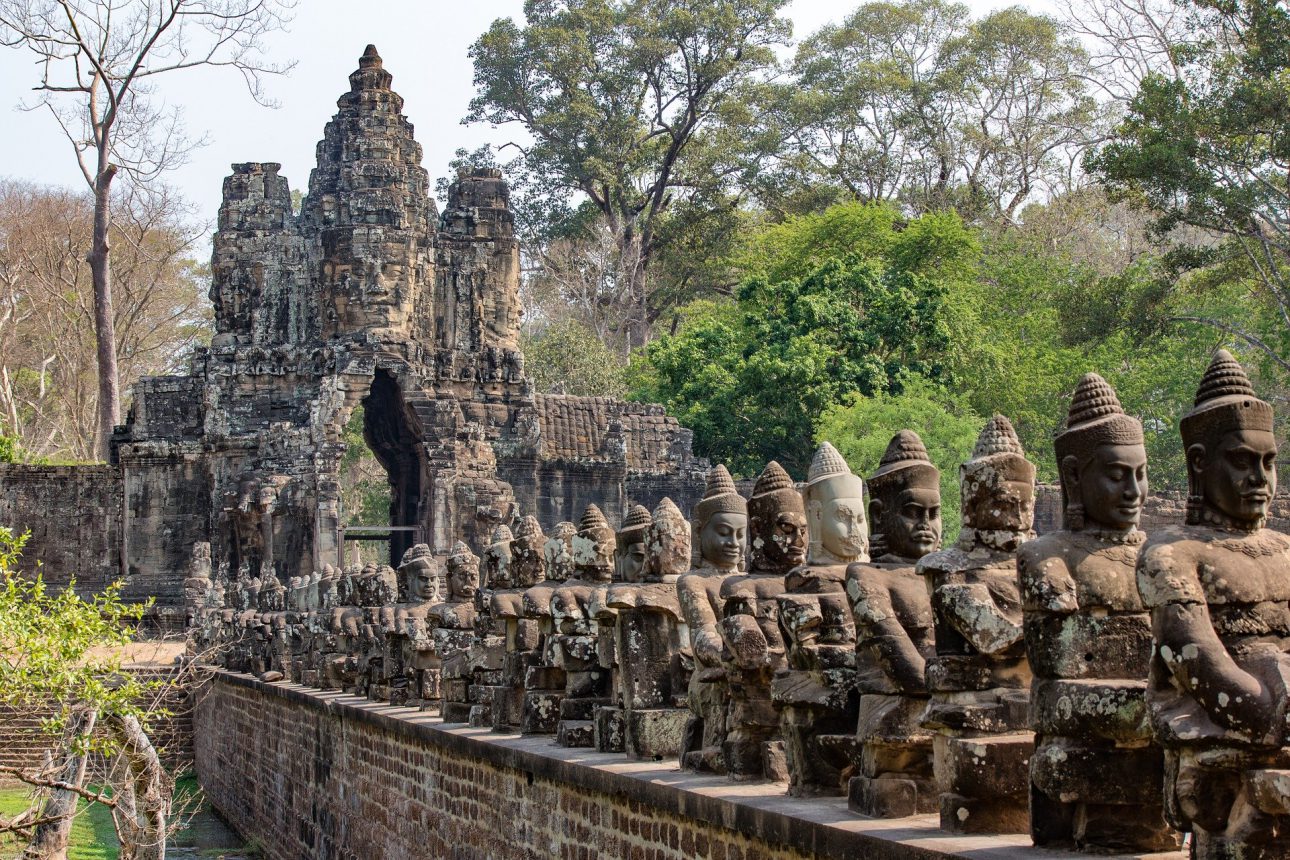 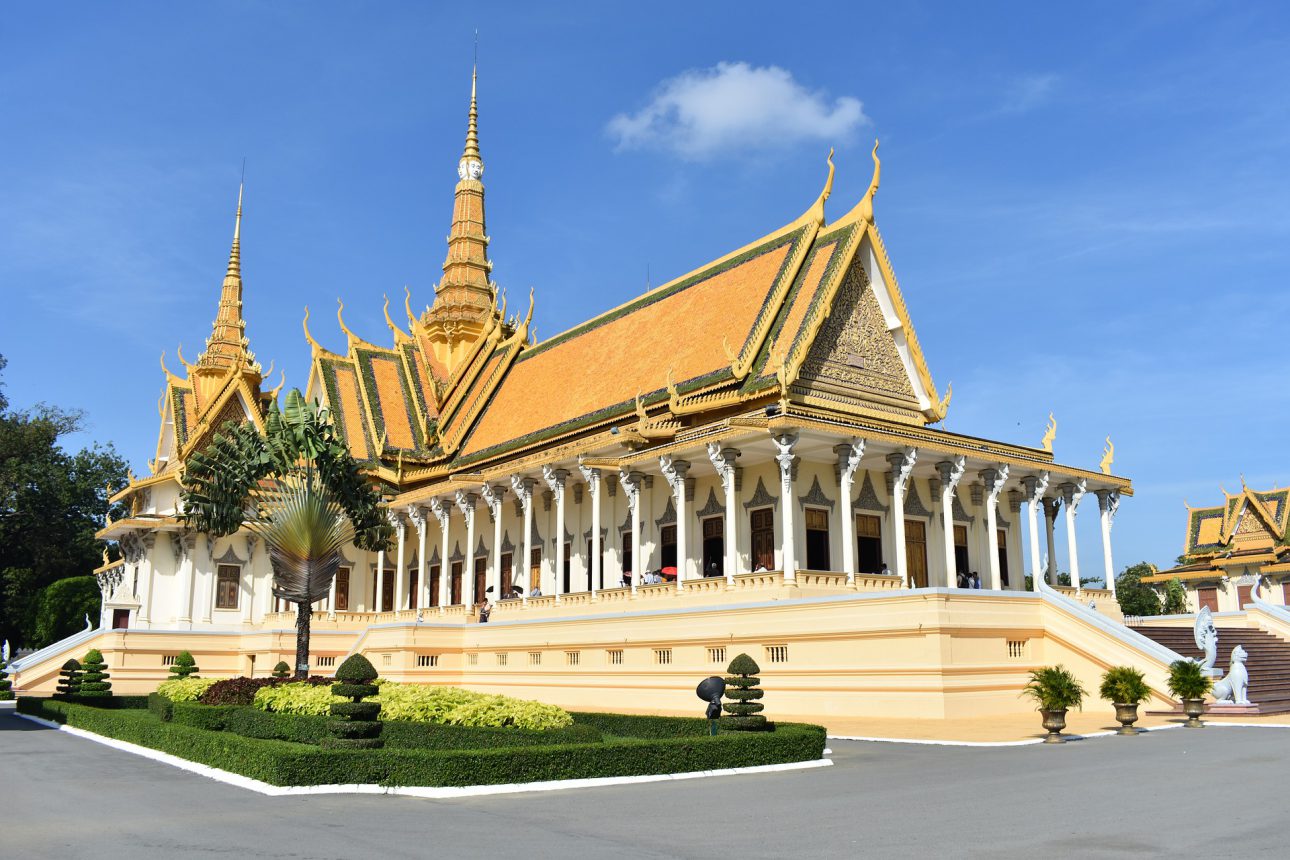 END_OF_DOCUMENT_TOKEN_TO_BE_REPLACED

With the perfect mix of history, culture and nightlife, Phnom Penh is the perfect place to begin your adventure in Cambodia. Take in both the beauty and the brutal recent history of Phnom Penh with visits to the Royal Palace complex and the Tuol Sleng Genocide Museum. Travel to Siem Reap to explore the fascinating history and remarkable temples of Angkor, marveling at the grandeur of historic thousand-year old restored ruins. Encounter towering monuments of Hindu and Buddhist origins and explore a traditional culture unlike any other. Cambodia is more than just its temples, and you will explore just that with visits to lively local markets and Tonlé Sap Lake’s floating villages.

With the perfect mix of history, culture and nightlife, Phnom Penh is the perfect place to begin your adventure in Cambodia. Take in both the beauty and the brutal recent history of Phnom Penh with visits to the Royal Palace complex and the Tuol Sleng Genocide Museum. Travel to Siem Reap to explore the fascinating history and remarkable temples of Angkor, marveling at the grandeur of historic thousand-year old restored ruins. Encounter towering monuments of Hindu and Buddhist origins and explore a traditional culture unlike any other. Cambodia is more than just its temples, and you will explore just that with visits to lively local markets and Tonlé Sap Lake’s floating villages.

Welcome to Phnom Penh - the capital of enchanting Cambodia. Upon arrival, collect your luggage and meet our local guide, transferring to your hotel for a short rest. The afternoon will commence with a delightful discovery of “the Pearl of Asia”, as it was called in the early 1900s during its French colonial period.

No trip to Phnom Penh is complete without a complete tour of the Royal Palace, one of the city’s most iconic landmarks and primary residence of the Cambodian Royal Family. Set upon the bank of the Tonlé Sap River, the golden structure’s construction began in 1886 and was completed shortly before the start of World War I. Within the Palace’s walls you will also find the Silver Pagoda (Temple of the Emerald Buddha). This extraordinary structure gets its name from its floor, covered by 5,000 silver tiles weighing around 1kg. The pagoda houses an extraordinary collection of Buddhas made from gold, silver, crystal, and bronze.

Continue onwards to the National Museum of Cambodia, just north of the Royal Place. Built in a traditional Khmer style, the museum is home to the world’s finest collection of Khmer sculptures from the 4th to 13th centuries. Over 5,000 pieces are on display, constituting the repository of the Kingdom's cultural wealth.

If time permits and you’re not too tired, finish the day with a short walk up Phnom Penh’s only hill to Wat Phnom, a Buddhist temple serving as a religious sanctuary for the people’s prayers and offerings since 1373.

Enjoy breakfast at the hotel before a somber visit to the Tuol Sleng Genocide Museum, a former S-21 interrogation and detention center turned memorial site to those who were killed during the Khmer Rouge regime. Located in the heart of Phnom Penh, it preserves a tragic period in history with the aim to encourage visitors to be messengers of peace.

Your last stop in Phnom Penh is the Toul Tompoung Market. Also known as the Russian market due to its popularity with Russian expats during the 1980s, it’s now one of the best places in town for tourists to pick up souvenirs within the walls of the fortifying Stalinist architecture.

After lunch at a local restaurant, head to Phnom Penh Airport for a short fight to legendary Siem Reap. Once you reach your hotel, the rest of the day is free at leisure.

Don’t skip breakfast this morning as you’ll need all your energy for a full day of exploring the most fabled temples in Angkor Archaeological Park’s short circuit.

First on the list is the impressive ancient fortress city of Angkor Thom, the last capital of the Great Khmer Empire under the reign of Jayavarman VII in the late 12th century. Built in an almost-exact square layout and surrounded by an 8-meter high 12 kilometer long stonewall with five entrance gates, the impressive gates are carved with three giant faces, while the causeways are flanked by sculptures of 54 gods on the left and 54 demons on the right.

Continue to the Bayon Temple, the centerpiece of the Angkor Thom complex, renowned for its 54 towers decorated with 216 mysterious stone faces. Proceed to Baphuon Temple nearby. This 11th century pyramid–style temple was probably amongst the most impressive of the Angkor temples in its day. Climb its steep stairs to the upper terrace of the temple, taking in the great views from there,  ending the morning part of the tour with visits to the Elephant’s Terrace and the Leper King’s Terrace, both known for their intricate bas-reliefs.

Rest during a delicious Khmer-style local lunch before the moment you have been waiting for, magnificent Angkor Wat, the world’s largest religious monument. The 12th century architectural masterpiece took 30 years to complete and represents the Khmer civilization at it grandest. Crowned by five towers with elaborate bas-reliefs and detailed statues, let yourself be enthralled by this world wonder and national symbol of Cambodia.

End the day with a sunset viewing over temples and the jungle from the top level of Pre Rup temple before returning to your hotel for a much-deserved rest.

Your final day in Cambodia begins with an exquisite breakfast at the hotel and a trip through the countryside, driving past expansive rice fields and quaint local villages to Tonlé Sap Lake, the largest freshwater lake in Southeast Asia. Take a relaxing boat trip along the canals that lead to lake, visiting  floating fishing villages and observing the vibrant daily life of the locals.

Then, learn about the ancient Khmer art craft of silk production at Angkor Silk Farm, where you can learn all about the breeding process and life cycle of the silkworm to how to spin, dye, and create beautiful silk weavings on wooden hand looms.

Have lunch in a local restaurant before transferring to Siem Reap International airport for your upcoming travel arrangements.

Hotels are subject to availability. In case any above hotel is not available, another similar hotel will be used.

+ Tours and transfers by private air-conditioned vehicle unless stated otherwise

+ Entrance fees for Angkor Archaeological Park (1 day), and all other mentioned activities and tours

+ Tips: It is recommended to tip your guide and driver USD8/day/guest.

A deposit of 30% of the total booking is required within three days from the date of confirmation. The balance payment is due at 45 days prior to tour commencement date. For bookings made less than 45 days, full payment is required. Bookings will be cancelled if payments are not received by the due date(s).

Payment can be made via bank transfer or credit cards. In addition to the total payable amount, credit card payments will incur a merchant fee of 2.5% for MasterCard and Visa, 3% for American Express. Any bank charges and merchant fees must be covered by the customer.

Any amendments to confirmed bookings must be requested by the party leader in writing (by email). Whilst we will endeavor to assist, we cannot guarantee that requests will be met. If we can make the requested change, you will be provided with a quote detailing any additional costs, whether incurred due to your amendments, imposed by a Third-Party Travel Provider, or our amendment fees. In all cases, the following amendment fees shall apply:

+ If amendments are made within 45 days prior to scheduled tour date: the above standard cancellation fees will apply, and full price will apply to new travel arrangements.

We will not charge any cancellation/amendment fees if it is due to a breach by us of any of our obligations or due to our fault; or if the Third-Party Travel Provider amends your booking through no fault of the customer.